Revelation 17 and 18 is Babylon the great , which is to be ” the new world religious, economic and political system ” existing on earth before the return of Christ .

Judgment of the great whore 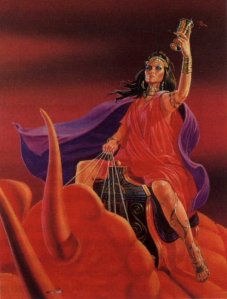 Then came one of the seven angels which had the seven vials, and talked with me , Come hither, I will show you the judgment of the great whore that sitteth upon many waters, 2 with whom they have committed fornication the kings of the earth and the inhabitants of the earth have been made drunk with the wine of her fornication .

As we have already read earlier in chapter 16 where we studied the seven bowls , and all the judgments of God , we saw how his anger was poured out upon the earth, and the fall of Babylon . ( 16:17-21 ) . Now we see in this next chapter as one of the seven angels invites John to observe the fall of the great whore which is the “new world system apostate ” or also known as ” new world order” . 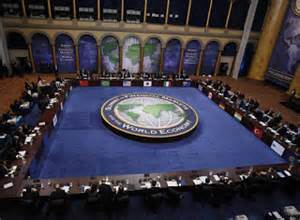 Revelation refers us to several women , we must begin by

1. Jezabel , which begins introduced as apostasy in the Church Rev 2:20 .

Three . the harlot, the apostate end world system , we read in chapter 17 and 4 ,

3 And he carried me away in the spirit into the wilderness: and I saw a woman sit upon a full of names of blasphemy, having seven heads and ten horns scarlet beast . 4 And the woman was arrayed in purple and scarlet , and decked with gold , precious stones and pearls , having in her hand a golden cup full of abominations and filthiness of her fornication : 5 And upon her forehead was a name written , MYSTERY, BABYLON THE GREAT, THE MOTHER OF HARLOTS and abominations of the earth. 6 And I saw the woman drunken with the blood of the saints, and the blood of the martyrs of Jesus: and when I saw her, I wondered with great admiration. 7 And the angel said unto me, Wherefore didst thou marvel ? I will tell thee the mystery of the woman and of the beast that carrieth her, which hath the seven heads and ten horns . 8 The beast that you saw was , and is not, and will ascend out of the bottomless pit and go into perdition: and the inhabitants of the earth whose names have not been written from the foundation of the world in the book of life, they behold the beast that was and is not and will come . 9 Here is the mind which has wisdom: The seven heads are seven mountains on which the woman sits , 10 and they are seven kings . Five have fallen, one is , the other has not yet come, and when he cometh, he must continue a short time. 11 And the beast that was, and is not, is himself also the eighth , and is of the seven, and goeth into perdition . 12 And the ten horns which you saw are ten kings who have not yet received a kingdom, but who for one hour will receive authority as kings with the beast. 13 These have one mind , and shall give their power and strength unto the beast . 14 war against the Lamb , and the Lamb shall overcome them: for he is Lord of lords and King of kings: and they that are with him are called and chosen and faithful. 15 He said to me : The waters which you saw, where the harlot sits , are peoples, multitudes , nations and languages. 16 And the ten horns which you saw on the beast, these shall hate the whore , and shall make her desolate and naked, and shall eat her flesh , and burn her with fire: 17 For God hath put in their hearts to accomplish his purpose agree , and give their kingdom unto the beast , until the words of God are fulfilled . 18 The woman you saw is the great city that rules over the kings of the earth .

Come to verse 18 ” And the woman whom you saw is the great city we reigns over the kings of the earth.” Here we read very clear that this is a city that reigned over the earth in the days of John. The seven heads of verse 3 , they are symbols of mountains as we see in verse 9. You could say with certainty that is Rome. , Because this city is situated on seven hills. It should be noted that when the book of Revelation was written , Rome was who reigned over the kings of the earth. 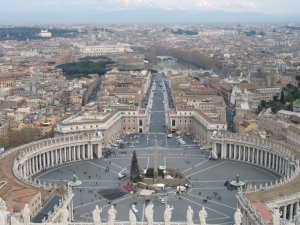 While we remember the chapter 13 we realize that it is the same beast that is the antichrist. This world ruler who presents Chapter 8 will surge from the abyss , serving notice to rise from the dead. This beast described here its presented to us dressed in scarlet, relating it to the dragon, which is none other than Satan see 12:3 . This beast has seven heads and ten horns, which is also identified with Satan see 12:3 , and 13:1 . If we now read verse 10 we see the seven heads are seven kings. equal seven mountains. And the ten horns that tell us in verse 10 are ten kings. So the beast resembles the antichrist and his person. These ” seven kings ” could be translated as “seven kingdoms ” assuring us that the kingdom of the beast will be the world’s seventh kingdom, one that not even the world has yet seen . 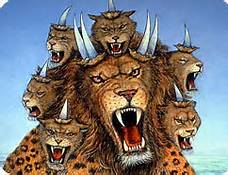 We’ve reviewed over the heads and we have learned that there are seven mountains view (see 9 ) , and the seven kings or kingdoms ( see 10) Egypt , Assyria, Babylon , Persia, and Greece were the five fallen kingdoms. And ” Rome” was the kingdom that was in the days of John, so that way we can know that the kingdom is not yet come to the beast that is the seventh kingdom.

Of these ten kings but we’ve explained in verse 12. , Where we talk about the revival of the Roman Empire is an analogy of the ten toes of the image of Daniel 2:36-45 . All this would be very strange for John because in his days even these kings had not received their power, because this ready for the last days , when resurface the European federation who will be lead by the beast when it comes to power . So, without a doubt , we know that these ten kings would support the beast in his battle against Christ and the saints which with the help of the beast, destroy the great whore .

The nations of the world are the waters where the harlot sits . ( see 15). And this whore will have total influence over all the earth both in politics and in the economy, as well as in religion.

Rome is the harlot who represent the world church ” apostate ” in recent days . In recent times a new system of global Church was organized . And this ” bitch” will be involved in all political, economic world and with the help of the beast would become a great power system. This beast will have the full backing of the world or rather the ten kings to ride to victory . (Rev 6:1-2 ) The nations of Europe will come to a junction . During the first half of the Tribulation is where the scene in chapter 17 takes place , although there is still the beast is not even shown his true satanic character. But this will only be up to half of the tribulation , because this beast will want to take all the power and worship for itself . ( Cap 13) Why would the beast would want to get rid of the harlot, because it represents the worship of God , even in as an ” apostate state .” In ( verse 16 ) indicates that the federated nations of Europe will turn their back to the world church and destroy it  , thus this will be fulfilling the prophecies of Revelation 2:20-23 . Then , once the whore have been removed , then  the beast god plead and demand the worship of nations. 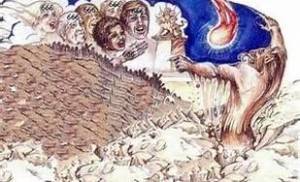 The true church of God is described as ” a pure bride ”