The scroll and the Lamb 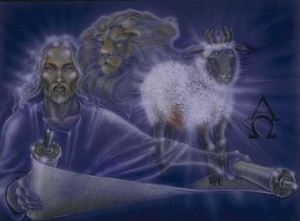 5 Then I saw in the right hand a book written within and without, sealed with seven seals sitting on the throne. 2 And I saw a strong angel proclaiming with a loud voice, Who is worthy to open the scroll and break its seals? 3 And no one in heaven or on earth or under the earth could open the book, neither to look thereon. 4 And I wept much , because I had not found worthy to open the book , and read it , neither to look thereon . 5 And one of the elders saith unto me , Weep not . Behold, the Lion of the tribe of Judah, the Root of David , hath prevailed to open the scroll and its seven seals.

The <book> refers to a scroll with seven seals roll hardbacks non existent in those days. These rolls are to reed reeds

that grew in the rivers 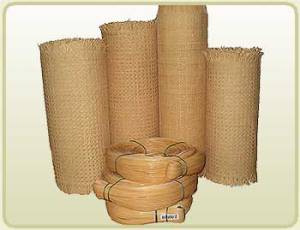 and were very expensive  . This particular roll is the title to Christ over creation. A Roman testament was sealed with seven seals, this stuff is a testament that Christ gives the right to claim the creation by virtue of his sacrifice. A will alone could open it and Christ is the heir of all heir  ( Heb 1:2 ) The fact that the scroll is written on both sides shows that you can not add anything more , the fate of a sinful world is  determined.

Revelation contains several symbols and to understand them,  it must be interpreted in the light of the Old Testament. In this case you need to refer to Jeremiah chapter 32 in which operation is in the process of what the redemption of the land was called. The basis for this purpose was ordained by God in Leviticus 25:23-28 which says, ” The land shall not be sold permanently , because the land is mine, for ye are strangers and sojourners with Me. Therefore, in all the land of your possession you shall grant a redemption for the land. When your brother becomes poor and sells some of his property, then his nearest relative is to come and redeem what his brother sold. And when the man not to redeem it , and himself be able to redeem it , then count the years of the sale , and the overplus unto the man to whom he sold it, and return unto his possession . But if not himself be able to get it back , which is sold shall remain in the possession of the buyer until the year of jubilee: and in the jubilee it shall go out, and he shall return to his possession . “

This will guarantee that no one becomes a landowner and the land remains in the same family for generations . In Jeremiah 32, God said to his servant , the prophet , his cousin Hanameel come to ask you to redeem or purchase its field in Anathoth in the territory of Benjamin. Jeremiah did the same and redeemed or bought that field for 17 shekels of silver. Then Jeremiah wrote the details of the purchase of two rolls .

One was in the public domain . Do not sealed , but the second was sealed with seven seals and stored in a clay pot in the temple. It only took him out of there when someone appeared right to redeem the property , according to the instructions we read in the book of Leviticus. A person entitled to redeem the land was known as the kinsman redeemer . If everything was in order, the kinsman redeemer could buy land to recover and was recognized as the legitimate owner of that land.

When God created all things, God gave Adam the domain of all created animals and everything else 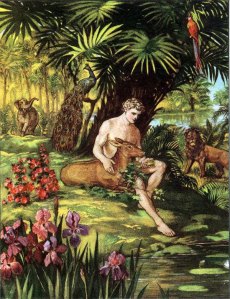 .  But Adam lost dominion of creation when he fell into sin. Satan therefore came to dominate creation. But only for a while. Only until a kinsman of Adam appears. The sealed with seven seals , written within and without, that John saw in the hand of him that sat on the throne a book is the title of creation.

Who will be the redeemer right to open the seals of this book? Well that’s what the rest of the passage. Let’s see who is the redeemer .

Revelation 5 : 2-5 says, “And I saw a strong angel proclaiming with a loud voice, Who is worthy to open the scroll and break its seals? And no one in heaven or on earth or under the earth could open the book, neither to look thereon. And I wept much, because no man was found worthy to open the book and read it , neither to look thereon . And one of the elders saith unto me , Weep not . Behold, the Lion of the tribe of Judah, the Root of David , hath prevailed to open the scroll and its seven seals . “ 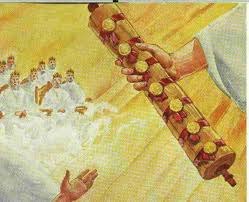 heard the powerful voice of a mighty angel . The fact that John speaks of a mighty angel suggests that it was the angel Gabriel, just because the name Gabriel means : The strong man of God. According to Luke 1:19, Gabriel is God. This angel makes an incisive and relevant question: Who is worthy to open the scroll and break its seals? In other words he was asking : Who is the redeemer of Adam with the right to redeem the creation whose domain fell to Satan? John must have been much excited . Finally the creation will be freed from the dominion of Satan . But the illusion soon turned to disappointment.

Text that no one in heaven or on earth or under the earth could open the scroll or even look says . This means that the entire universe was not worthy to redeem God’s creation . Throughout the history of mankind , many men have risen pretending redeem or own creation. Nebuchadnezzar was one of them , but failed miserably . After Alexander the Great rose. He began to mourn when there was more territory to conquer, but within a year I was dead and his empire disintegrated . Later rose Julius Caesar, but his rule also evaporated. He was followed by Charlemagne , Napoleon and even Hitler. People who tried to dominate creation. None of them was worthy. Knowing that there were none worthy of regaining control of the creation , Juan began to mourn as a baby. As you may continue creating under the dominion of Satan. In that, he arose from his throne, one of the elders and tenderly said to John, ” Do not weep .” Beautiful words . But what this old man said to John was far greater . Behold the Lion of the tribe of Judah, the Root of David , has prevailed to open the scroll and its seven seals. These words must have sounded like sweet music to the ears of John.

He had found one worthy to open the scroll and its seven seals. It appeared the redeemer of Adam. This is the Lion of the tribe of Judah . The root of David . This means it is none other than the Messiah of Israel, the Messiah 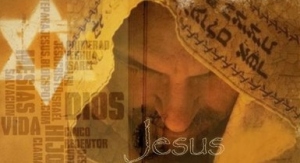 the Christ  is the Lion of the tribe of Judah 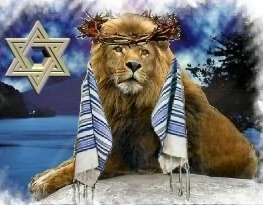 in Genesis 49:9-10 . He talks about his fierceness and strength, which was veiled in weakness in his first coming to this world , but be revealed in all its magnitude in his second coming . He is also the root of David . It’s another of their titles. Appears in Isaiah 11:1. Speaks of his right to the throne of Israel. Besides the text says that Jesus Christ defeated . This refers to the victory he obtained over Satan on the cross of Calvary. For all this, Jesus Christ is the redeemer of Adam. He is entitled to redeem the creation by the sin of Adam was under the dominion of Satan. It is worthy to open the scroll and its seven seals . John must have felt so joyful . John knew Jesus Christ personally . What satisfaction must have felt to know that he has recovered the man lost in the Garden of Eden.

If you have Christ as your Savior , you are on the side of victory. Never mind that for now it seems that Satan has the upper hand . In short it is a defeated foe . Very soon lose the domain now has over creation.