In these two last chapters of the book of Revelation is very clear to us at ( verse 5) ” Behold , I make all things new .” Here we see that these new things will be part of the eternal home of the believer.

New heaven and a new earth

I saw a new heaven and a new earth: for the first heaven and the first earth passed away , and the sea was no more . 2 And I saw the holy city, new Jerusalem, coming down out of heaven from God , prepared as a bride adorned for her marido.3 And I heard a great voice out of heaven saying , Behold, the tabernacle of God is with men , and he will dwell with them, and they shall be his people, and God himself will be with them as their God.4 wipe every tear from their eyes , and death shall be no , nor will there be mourning , nor crying, nor pain ; for the former things pasaron.5 And he that sat upon the throne said , Behold , I make all things new . He said to me , Write: for these words are trustworthy and verdaderas.6 And he said, It is done. I am the Alpha and the Omega , the beginning and the end. To the thirsty I will give from the spring water life.7 who overcomes shall inherit all things, and I will be his God and he shall be my son 8 But the cowardly, unbelieving , abominable, murderers , sexually immoral, sorcerers , idolaters, and all liars shall have their part in the lake which burns with fire and brimstone: which is the second death .

” God will remove all sin  and destructive behavior from the old earth . ” And this does not tend the least doubt as well is that this chapter begins .

The fiery trial through which all things are judged produce this renewal of the old earth and the old heaven . The sea will exist no more , we do not know exactly how will the new water system be, if we would have rivers , seas, for sure God has already prepared the perfect new system for feeding plants and fill the seas if we’ll ever have them. This wonderful new place that God has prepared for us , death no longer exist and God will wipe away every tear from our eyes, no more tears or pain, the old way has passed !!  But the best of all  and even more glorious is that we will dwell with the Lord and be His people , we will be his children and He our father. This same word that God says ” It is made” is the same as our Jesus said at the time of his death when he said “It is finished .” He is the Alpha and the Omega being this ( the first and last word of the Greek alphabet ) . In ( verse 8) states that we can not all get into this new creation of God, for those who would not believe in Christ, who never turned away from sin never will be able to see this wonderful beautiful and glorious place. 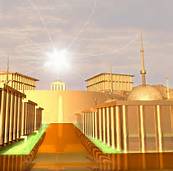 9 And there came unto me one of the seven angels which had the seven vials full of the seven last plagues , and talked with me , saying, Come hither, I will shew thee the bride, the Lamb’s wife. 10 And he carried me away in the spirit to a great and high mountain, and showed me the holy city Jerusalem coming down out of heaven from God , 11 Having the glory of God. And its light was like a precious stone, like a jasper , clear as crystal . 12 And had a great, high wall with twelve gates, and at the gates twelve angels, and names written thereon , which are of the twelve tribe of the children of Israel : 13 On the east three gates, on the north three gates, on the south three gates on the west three gates . 14 And the wall of the city had twelve foundations, and on them the twelve names of the twelve apostles of the Lamb .

If we pay close attention to ( verse 2) we see that the new Jerusalem comes down from heaven , it is a suggestion as to describe a heavenly city with new people of God which will be a city on standing on air on the land , and this will be for over a thousand years called the  “Millennium ” it is obvious that the new Jerusalem unites peoples from the OT and NT. The twelve tribe mentioned here with the names of each of them recorded in each of the twelve gates are the chosen twelve tribes of God.

Dimensions of the new city of Jerusalem 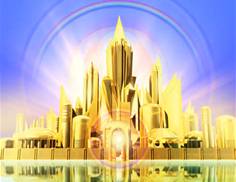 15 And he that talked with me had a measuring rod of gold to measure the city, its gates and its wall. 16 And the city lieth foursquare , and the length is as the breadth: and he measured the city with the reed, twelve thousand furlongs : the length , height and width are equal. 17 And he measured its wall , one hundred forty-four cubits , the measure of man , which is of an angel. 18 The construction of its wall was of jasper: and the city was pure gold, like unto clear glass 19 and the foundations of the city wall were adorned with every precious stone . The first foundation was jasper, the second sapphire, the third chalcedony, the fourth emerald, 20 the fifth onyx, the sixth carnelian, the seventh chrysolite, the eighth beryl, the ninth topaz , the tenth chrysoprase, the eleventh jacinth, the twelfth, amatiste.21 the twelve gates were twelve pearls: each individual gate was of one pearl . And the street of the city was pure gold like transparent glass . 22 And I saw no temple therein: for the Lord God Almighty is its temple , and the Lamb . 23 The city had no need of sun or moon to shine in it: for the glory of God did lighten it , and the Lamb is its lamp.

Here we are given  the exact measurements and dimensions of this glorious city , which surpasses all human imagination. ” And the city lieth foursquare, (meaning that this city will be the same for all angles ) and has a length equal to the breadth : and he measured the city with the reed, twelve thousand furlongs : the length , the height and width are equal. ” Any measure gives us to understand that is a perfect cube shiny ” holy place ” with the glory of God that is illuminating to this perfect and holy city .

24 And the nations of them which are saved shall walk in the light of it: and the kings of the earth bring their glory and honor into it . 25 Its gates will never be shut by day: for there shall be no night . 26 And they shall bring the glory and honor of the nations into it . 27 not enter into it anything that defiles , or causes an abomination and a lie: but they which are written in the book of life of the Lamb .

Only the light of God will exist in this city , there will be no more darkness, for is the night significance of sadness, crying , death, pain , and as no longer exists darkness in this glorious city but only in the light of the glory of God wll be enough to be in port . Doors will no longer be closed,  not ever , no longer there will be any fear cause all devil minded has disappeared and all evil has already been defeated . And this renewed glory city will be inhabited by many nations and millions of people will be living it ,  worshiping forever and ever the only true God.