The message to Thyatira 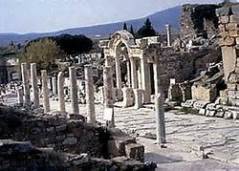 18 And unto the angel of the church in Thyatira write; These things saith the Son of God, who hath his eyes like unto a flame of fire, and his feet are like fine brass; 19 I know thy works, and charity, and service, and faith, and thy patience, and thy works; and the last to be more than the first. 20 Notwithstanding I have a few things against thee, because thou sufferest that woman Jezebel, which calleth herself a prophetess, to teach and to seduce my servants to commit fornication, and to eat things sacrificed unto idols. 21 And I gave her space to repent of her fornication; and she repented not. 22 Behold, I will cast her into a bed, and them that commit adultery with her into great tribulation, except they repent of their deeds. 23 And I will kill her children with death; and all the churches shall know that I am he which searcheth the reins and hearts: and I will give unto every one of you according to your works. 24 But unto you I say, and unto the rest in Thyatira, as many as have not this doctrine, and which have not known the depths of Satan, as they speak; I will put upon you none other burden. 25 But that which ye have already hold fast till I come. 26 And he that overcome, and keepeth my works unto the end, to him will I give power over the nations: 27 And he shall rule them with a rod of iron; as the vessels of a potter shall they be broken to shivers: even as I received of my Father. 28 And I will give him the morning star. 29 He that hath an ear, let him hear what the Spirit saith unto the churches.

The eyes of fire and feet of bronze 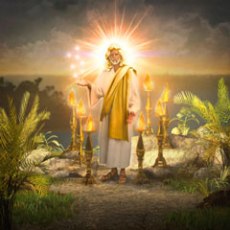 come to see and judge, but this corrupt Church will not regret. The church had works, service and patience, but was full of sin. Jezebel Here , the only woman mentioned in the seven letters , referring to the wicked Queen Jezebel , wife of Ahab (1 R16 :2 -10) was a pagan woman , daughter of a priest of Baal worship and promoted Baal in Israel. He practiced both prostitution and sorcery ( 2R9 : 22) as idolatry , murder , deceit, and the priestly office . And the Thyatira Church was following his example and leadership! .

The recommendation to the church.
Revelation 2:24-25 says, “But you and the rest who are in Thyatira, who do not hold to her teaching and have not known what they call the depths of Satan , I tell you none other burden ; but that which ye have already hold fast till I come . ”
Notice how Jesus sets aside the church belonged to Jezebel, the papal church.
Puts to the side of the road and focuses on a group within it, which has not been contaminated with the doctrine of Jezebel. During this period the church were faithful believers in the word of God who were reluctant to follow the path of the papal church. It is these believers to Jesus Christ recommends that remain faithful . The only burden placed on them that Jesus Christ is to retain the principles of the word of God until Jesus Christ comes again.
the reward

Revelation 2:26-29 says: “He who overcomes , and keeps My works until the end, to him will I give power over the nations: and he shall rule them with a rod of iron, and shall be broken like pottery , as I also have received my Father , and I will give him the morning star . He who has an ear , let him hear what the Spirit says to the churches . “

Believers who are faithful , without yielding to the pressure of the corrupt church compared to Jezebel , will award authority over the nations . This means that reign with Christ during the millennium. How interesting .
The corrupt church of this age, eagerly sought authority over the nations , but never got it. In contrast, those who remained faithful to the word of God will receive , from God , authority over the nations . Also receive the morning star . John is responsible for displaying the Morning Star is Jesus Christ himself . Revelation 22:16 , in the words of Jesus we read: “I am the root and offspring of David, the bright morning star ”
The period of the dense darkness which engulfed the corrupt church , has an end. It will not be always so. Before the end , Jesus appears , the morning star , to lead the true believers to always be with him. In this passage we have seen a stern message to a corrupt church . May God ‘s warnings and admonitions make us all meditate on the need to stay true to the simple principles of the Bible , without yielding to the pressures to compromise faith for worldly power