9 When he opened the fifth seal, I saw under the altar the souls of them that were slain for the word of God and for the testimony which they held . 10 And they cried with a loud voice, saying : How long, O Lord , holy and true, dost thou not judge and avenge our blood on them that dwell on the earth 11 And they were given white robes and told to rest a little time , until the number of their fellow servants and their brethren, who had also to be killed as they were completed.

The presentation of the martyrs martieres 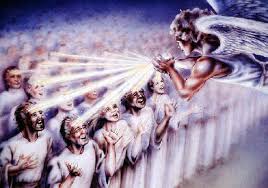 John is looking at Jesus Christ resurrected and glorified in heaven as he opened the fifth seal the book he had taken from the hand of him that sat on the throne , namely God .

The book is the title of the whole creation . By His sacrifice on the cross, Jesus is worthy to redeem creation. By this time He has already opened four of the seven seals of the book.

The first stamp meant the entrance of the Antichrist on earth to master at the beginning of the tribulation.

The second seal meant open warfare between nations and people in the world dominated by the Antichrist .

The third seal meant famine on the land ruled by the Antichrist .

The fourth seal meant death of a quarter of the world’s population .

If that occurred today , more than 1,600 die millions.

In thinking about this , a mixture of emotions in which we have Christ as our Savior originates. On the one hand there is the joy of knowing that love Jesus Christ has delivered us from going through that terrible period known as the Tribulation. But on the other hand is painful  and sadness for the billions who have to endure the awful punishment of God during the Tribulation. This should motivate us to warn of danger to the whole world, they find refuge in Christ Jesus.

The opening of the fifth seal means several things . Everything revolves around martyrs. The first thing we notice is the presentation of the martyrs. As soon as Jesus Christ, the Lamb opened the fifth seal, John saw under the altar the souls of dead people. But they were not ordinary people. Text they were souls of people who died because of the word of God and for the testimony which they says . Were souls of martyrs. What happens is that once the Tribulation begins, once the church has been raptured , the world thousands of people to the reality of the disappearance of millions of believers place their faith in Christ and receive him as Savior will rise .

Your faith will make you stand up and revolt against the rule of the Antichrist. The Antichrist will respond with effective and ferocious persecution of those believers . This will have its climax in the middle of the tribulation. Later, in chapter 13 of Revelation we are given details of the apparatus of persecution of this sinister character called Antichrist. These believers were not such when it happened the rapture of the church. That’s why I stayed on earth and entered the tribulation period . Became believers during the tribulation and that meant for them to have to suffer horrible persecution by the Antichrist. John sees the souls of the martyrs under the altar. When the priests of the Old Testament featuring an animal on the altar of burnt offering of his blood shed at the foot of the altar.

From the perspective of the Old Testament, the blood represents life. These martyrs , through his sacrifice , his life as a libation poured for the glory of God. Paul uses this figure when in Philippians 2:17 speaks of being offered upon the sacrifice .

The prayer of the martyrs , is a prayer asking God to act quickly and decisively . It is a request to God to intervene in the situation he and justice. So they are saying: Take revenge on the inhabitants of the earth. God will answer this prayer in his time and way. It may seem strange that the souls of the martyrs of the tribulation are asking God for vengeance upon the inhabitants of the earth. We’re supposed to love our enemies , bless those who curse you , do good to them that hate us , and pray for or on behalf of those who insult us and persecute us , according to the teaching of Jesus in Matthew 5:44 . But what we must recognize is that in tribulation God is pouring out His judgment on the earth . It’s a different era, the conditions are different , so that this prayer is not only understandable but perfectly justified. Incidentally, note that the souls of the martyrs are perfectly conscious in the sky. I say this because some false sects claim that when a person physically dies, the soul passes into a state of unconsciousness , called soul sleep . Well, here we have souls of people who died during the tribulation , but are in perfect use of all his faculties.

Depues see the patience of the martyrs.

Remember that the souls of the martyrs cried to God for vengeance upon the inhabitants of the earth. The answer of God we have in the second part of Revelation 6:11 which says, ” and told to rest a little while longer, until the number of their fellow servants and their brethren who were to be killed also like them. ”

God’s answer was that he executed the requested revenge, but in his time. Meanwhile, the souls of the martyrs had to wait . The wait would not be in trouble but total rest . Until when? Well, until the number of believers who will also be martyred on earth during the tribulation is completed.

Then God will take vengeance on those who dwell on earth. Interesting that God knows in advance how many and who are the believers will be martyred during the tribulation. This shows the omniscience and sovereignty of God. God knows everything from beginning to end . And not only knows , but he determines everything from start to finish .

The fifth seal then it means the death of a large number of believers during the tribulation. Christianity has had its stages. There have been occasions when confess the name of Christ was sufficient reason to be martyred . It happened in the past in the early centuries of Christianity, under the rule of the Roman empire. It happens even today in countries dominated by anti-Christian philosophies or religions.

12 I looked when He opened the sixth seal, and behold there was a great earthquake, and black the sun became as sackcloth of hair , and the moon became like blood, 13 and the stars of heaven fell unto the earth , as a fig tree sheds its winter fruit when shaken by a strong wind . 14 And the heaven departed as a scroll when it is rolled up, and every mountain and island was removed from its place . 15 And the kings of the earth, and the great , the rich, the captains , and the mighty men, every slave and every free man , hid themselves in the dens and in the rocks of the mountains , 16 and said to the mountains and rocks Fall on us , and hide from the face of him that sitteth on the throne and from the wrath of the Lamb: 17 for the great day of their wrath has come, and who can stand?

In Revelation three times earthquakes are mentioned , but along with them would be riots on earth and in heaven who terrorize the whole world .  Some biblical studies indicate that these verses describe the results of nuclear war , the sun and moon darkened , large land masses moving and people hiding in holes in the ground to escape the atomic radiation. This may be so, but we need to note that people hide from Christ anger in particular , not a catastrophe caused by man .

Verse 15 is a vivid description of what life will be during the first three and a half years of the tribulation. The Antichrist will reign over the United States of Europe , the Roman Empire revived , with a number of kings that follow. Another feature of the days of the tribulation is militarism , there will be captains , and fits very well with the revival of the Roman Empire of the Antichrist. There will be slavery ( slaves ) 19:13, where slaves and souls of men are included in the goods of Babylon. There will be great wealth and great poverty and the redistribution of wealth destroyed the economy of nations.

It seems then that the sixth seal judgment involves both literal physical destruction in heaven and on earth . In short we see the Antichrist begins his political career as a peaceful conqueror, but then resorts to war and economic controls to dominate other nations . The world accept his false peace by rejecting the Prince of Peace .