The church that serves 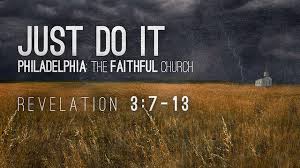 7 And to the angel of the church in Philadelphia write : These things saith the holy and true , who has the key of David , who opens and no one shuts , and shuts and no one opens : 8 I know thy works: behold, I have given before you open the door no man can shut thou hast a little strength, and hast kept my word, and hast not denied my name. 9 Behold , I give of the synagogue of Satan, which say they are Jews and are not, but do lie : behold , I will make them to come and worship before thy feet , and to know that I have loved you 10 Because thou hast kept the word of my patience, I also will keep thee from the hour of temptation, which shall come upon all the world, to try them that dwell upon the earth . 11 Behold , I come quickly: hold that fast which thou hast, that no man take thy corona.12 He who overcomes will I make a pillar in the temple of my God , and never will go out and write on him the name of my God , and the name of the city of my God, the new Jerusalem , which cometh down out of heaven from my God, and my new name. 13 He that hath an ear , let him hear what the Spirit says to the churches .

Philadelphia means brotherly love , so that we know immediately that we relate to saved people who love each other and the Lord. It was founded by the king of Pergamum , Attalus II Philadelphus circa 190 BC. The city suffered frequent earthquakes , though it remains until today . It was located about 60 miles south east of Sardis . The name Philadelphia has a deep symbolic meaning, because certainly in the church of the city of brotherly love between brothers in faith breathed .

The church of Philadelphia represents historically missionary church with a great spiritual strength but constant cooling . Philadelphia represents the missionary church of the last days . Starting from 1700-1900 . During this time the church experienced a burning passion to take the gospel to all the world . It was here that the great missionaries came to the remotest corners of the world moves. Precursors of this effort were men like Wesley , brothers Carlos and Juan , D. L. Moody , Ira Sankey , Finney , William Carey, David Livingstone , Hudson Taylor , and many more who spared no effort in bringing the gospel to everyone . Sadly this momentum grew weaker as time passed.
The sender is presented with three qualifiers.
The Saint, denoting the purity of the character of Jesus Christ. Being holy, he has every right to claim holiness in their followers.
Then he says is true. This means that he can not lie. All promises are true and if you have not met yet is only a matter of time for it to pass. Furthermore, due to the fact that Jesus Christ is true, this denotes that it is authentic , in contrast to many false Christs that stood at the time and also today.

Then he says he has the key of David ,

who opens and no one shuts , and shuts and no one opens . This is a perfect description of the authority and sovereignty of Jesus Christ. It is he who has the key to enter the kingdom offered David the millennium. In Revelation 1:18, Jesus Christ was manifested as one who has the keys of death and Hades. Here Jesus is presented as the one who holds the key to salvation and blessing . But the authority of Jesus Christ is not only in the field of salvation but in everything else. What he opens , neither Satan nor man can close . What he closes , neither Satan nor man can open . Jesus Christ is the one who has the final say in everything. Many times we find ourselves trying to open what Jesus Christ has closed , or trying to close what Jesus Christ has opened . This is impossible and if we persist in it , all you will achieve is to hurt ourselves.
” I know your works ” practically this is the only time that Jesus says to the reality of the church in Philadelphia . There is absolutely nothing more. Jesus Christ did not match any claim to do. Therefore, from the second part of verse 8 , Jesus is dedicated to mention the reward to this church. What model of church. !

The reward for this great church is varied. First, an open door. The second part of verse 8 says: “Behold , I have set before you an open door , and no man can shut it: for thou hast a little strength, and hast kept my word, and hast not denied my name. ”
He who has the power and authority to open , so that no one can shut , has used his power to open the door wide for the church of Philadelphia. This door can be understood in two ways. May access the kingdom , or may be an opportunity to serve the Lord. The church of Philadelphia has already party to the kingdom, and the church of Philadelphia took the door open to serve the Lord in heart. And this was not because the church of Philadelphia was rich and powerful. On the contrary, was poor and weak, but nevertheless , was dedicated to keeping the word of God and to be faithful in proclaiming the word of God. He never denied the name of Jesus Christ , not with words or actions.
Second, the claim to his enemies . This is what we have in Revelation 3:9 which says, ” Behold, I will make them of the synagogue of Satan, which say they are Jews and are not, but do lie : behold , I will make them come and bow your feet and acknowledge that I have loved you . ” 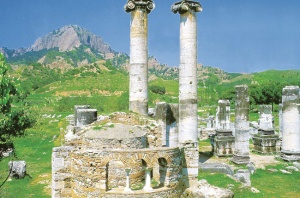 did not have a comfortable life. He suffered from constant harassment and opposition not only of the Roman Empire , but also a Jewish synagogue that was in the same city. This synagogue boasted of being the only chosen people of God and despised the brethren of the church of Philadelphia. But Jesus says that these Jews are not true Jews and the synagogue was not a real synagogue. Instead of true Jews were liars and instead of true synagogue , it was a synagogue of Satan . So were delivered by Jesus to bow down to the Philadelphia church not to worship , because only God deserves worship but to recognize that the church they hated him and despised , is actually the object of the love of Christ , the Messiah. It is the claim of the church in Philadelphia before their enemies.
Third, the release of divine judgment that will come upon the earth. Revelation 3:10 says, ” Because thou hast kept the word of my patience, I also will keep thee from the hour of trial which shall come upon the whole world, to try them that dwell upon the earth ”
The book of Revelation , later described indelible evidence that has come upon the whole world, to try them that dwell upon the earth . It is what is known as the tribulation . It will be something horrendous for those who have part in it. But true believers , such as the church of Philadelphia will not be present in the world when God will pour out his wrath on him. Says Jesus Christ, to be kept from the hour when the same test or tribulation begins. This is a strong testimony to support the doctrine of what is called the pre-trib rapture. This means that the church will be raptured just before the Tribulation begins . The church will not go and in half of the tribulation, and the fourth part of the tribulation , even for a little bit of trouble. Jesus said to keep the same time when the tribulation begins. It is the reward for true believers , who will show the truth of their faith by keeping the word of Christ ‘s patience .
Fourth, glorious position in heaven. Jump to Revelation 3:12 where we read: ” He who overcomes, I will make a pillar in the temple of my God, and he shall go out , and write upon him the name of my God , and the name of the city of my God, the new Jerusalem , which cometh down out of heaven from my God, and my new name. ”
The winners are the true believers . They will be made pillar in the temple of God. Not an earthly temple , but heavenly. This means stability . Never come away . Jesus will write on them the name of God. This means that their character will be Godlike . The name indicates the character . Jesus will write on them the name of the new Jerusalem . This means that they will have eternal citizenship in heaven or the new Jerusalem. Jesus Christ written on them their new name. It will be the new name by which they know Jesus Christ from the time you are with him. They are the rewards to the church of Philadelphia.

There is one recommendation that we purposely left for last . Revelation 3:11 and 13 says, ” Behold, I come quickly: hold that fast which thou hast, that no man take thy crown. He who has an ear , let him hear what the Spirit says to the churches . ”
Jesus Christ is coming soon to rid his church of judgment when God will pour over this world . While takes his coming to take His church , believers must retain what they have, this is his unwavering faith and good reputation . This will cause anyone to lose their reward in the judgment seat. Those who have spiritual ears to discern spiritual things must be alert to the message that Jesus Christ has left the church in Philadelphia .