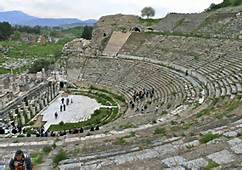 Messages to the 7 Churches :

To the Church in Ephesus

2 “To the angel of the church in Ephesus: 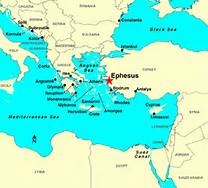 This says that holds the seven stars in his right hand and walks among the seven golden candlesticks : 2 I know your deeds, your hard work and your perseverance. I know you can not tolerate wicked men , and you put a * test those who claim to be apostles but are not, and have found them false . 3 You persevered and endured hardships for my name , not discourage .
4 But I have this against you: You have forsaken your first love. 5Remember therefore from whence thou art fallen ! Repent and do the things you did at first . If you do not repent , I will come and remove your lampstand from its place . 6 But you have in your favor : You hate the practices of the Nicolaitans, which I also hate.
7 He who has ears , let him hear what the Spirit says to the churches . To him who overcomes I will give to eat of the tree of life , which is in the paradise of God.

Notes: The Lord selected among the many seven churches of Asia Minor territory to emphasize their specific message. Start with Ephesus, the city nearest to Patmos . THE emperor had made a free city of Ephesus . ” Ephesus Church is apostolic times was beginning to lose his first love for the Lord . 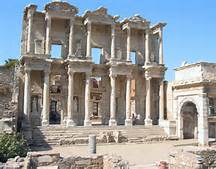 There worshiped the goddess Diana being this “religious immorality ” at its worst . Of course they had sins in all churches but the issues addressed in these seven churches cover all circumstances. The church at Ephesus had works, labor and patience, but love Jesus . What counts is not what we do for Jesus but the reason behind that. As Marta we can be very busy working with the Lord that we have no time to love .

Also it is now very busy day we are working for the Lord, but many are no sincere love for Him without passion Program . This is the Igelsia cumbered by great statistic, but it moves away from a supply of heart to the Lord .
The Nicolaitans name means ” conquer the people ” and suggests a separation between clergy ( bishops , priests , monks , forming part of the clergy ) . And among the laity (Applies to Christians who do not belong to the clergy or any religious order) . This sin began as works in Ephesus until it became doctrine in Pergamum .

From here begins to divert the Church ‘s teachings of the early churches .